I think I need to bring music running next time. Although I really love running in the quiet of the morning, I may have run faster if I had some tunes.  I did run in intervals, but was somewhat sporadic about it.  You know when you think…I feel great, I’ll run faster, and then, I’m tired, I’m slowing down. Those kind of intervals. 🙂 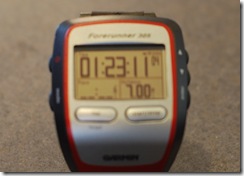 I love that Garmin! I won it at the half marathon last summer!

Ate a banana before the run, since I knew I’d be gone long.

Super hungry after the run.   Eggs and tortilla. 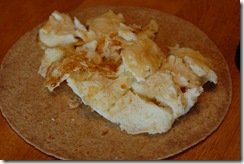 Spent an hour with my sister while she finished up this video! It turned out way cute.  She’s doing some sort of Palm Pre product thing.

After Sarah’s, another Protein bar.  These were the best price of protein bars for the amount of protein in contains.  (we found them at Costco), But in the past, I would have never eaten a meal replacement bar that contained 300 calories! It just seemed way to high.  But it hasn’t affected my weight loss in anyway way.  So, I’ll just keep eating them for now. 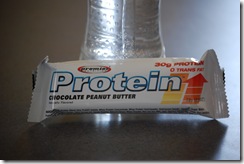 1:00, I realize this does not look appetizing.  But it was super good.  Some beef roast on a salad with some string cheese and tomato. And a pear. 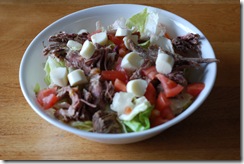 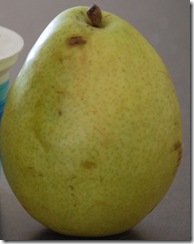 3:00: sitting down to study, so I’m munching on carrots, rather than pirate bootty this time!  Along with some cottage cheese, a small scoop of yogurt (because it was flavored, and I didn’t want the whole amount), and banana. 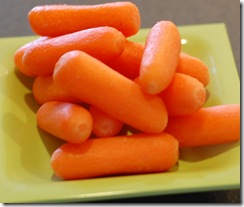 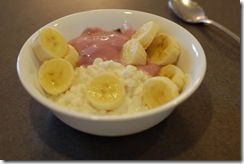 For dinner: Some broccoli and an egg white.  I just didn’t have much of an appetite for some reason. 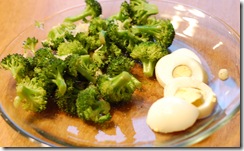 Some foods that I have not been getting enough of, and I will try harder tomorrow is Brown rice, wild rice, beans, maybe some quinoa…