I started the morning with an awesome Upper body weight workout in circuit fashion.  I found the routine in Muscle and Fitness Hers magazine.  It was quite fun, and made the time FLY by!

I got home, and had breakfast with the kids.  We had some cottage cheese pancakes. It was their idea to turn them green. I really did eat that many! 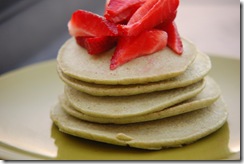 I ate so much, I didn’t have my second meal till noon.   Mindy, you may like this. It’s still a big hunk of chicken, but it was delicious.  I dipped a chicken tender in an egg wash, then bread crumbs.  Put it in a pan with a bit of olive oil till it browned on both sides, then baked it in the oven with some spaghetti sauce and a little mozzarella cheese. Only for 23 minutes so it was still juicy, not dry! It was great!!  The Diet Coke… well, you know!  Then apple with almond butter.  I find the unsweetened, no salt almond butter is way easier to stick to 1 TBL than sweetened peanut butter.  If I could think of peanut butter like Kathleen… if it doesn’t need to be stirred, its like a jar full of lard- Gross! 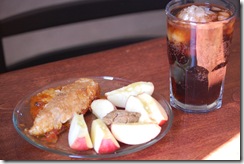 Then I was babysitting my adorable 1 year old nephew.  I was letting him eat Graham crackers, and completely UNCONSCIOUSLY I ATE ONE. This is not the photo of the one I ate, cause it really was an unconscious move on my part.

Then, another unconscious move, another Quaker Granola Bar.  We buy the variety pack from Costco, and the kids all leave the Oatmeal Raisin ones, and they are my favorite. They were staring at me from the pantry. 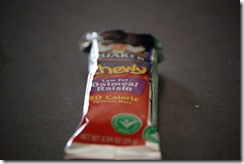 That’s when I realized… “Get ahold of yourself.  Have something with a little more substance so you don’t want to keep snacking”.  So I had this yummy peanut butter balance bar. 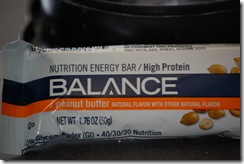 Then I got this new egg slicer in the mail that I won on another blog.  So I hurry and boiled some eggs to try it. I sliced the egg while it was still fragile and very hot. I’m sure after the eggs cool, it will turn out prettier. 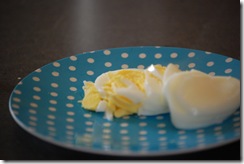 Oh yeah, then a string cheese. 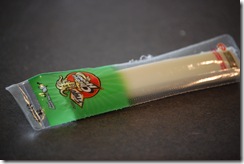 I’m having such a difficult time deciding to study for Bio chem!  I keep thinking, I’ll just retake it in the fall with an easier teacher (since I won’t have any classes to take this fall, and my current teacher is SUPER difficult!!).  That kind of attitude is making it really hard to get ready for the test I’m supposed to take this week!